Let's read: Eph 2:13-18 (NKJV) "But now in Christ Jesus you who once were far off have been brought near by the blood of Christ." {14} "For He Himself is our peace, who has made both one, and has broken down the middle wall of division between us,," {15} "having abolished in His flesh the enmity, that is, the law of commandments contained in ordinances, so as to create in Himself one new man from the two, thus making peace," {16} "and that He might reconcile them both to God in one body through the cross, thereby putting to death the enmity." {17} "And He came and preached peace to you who were afar off and to those who were near." {18} "For through Him we both have access by one Spirit to the Father." 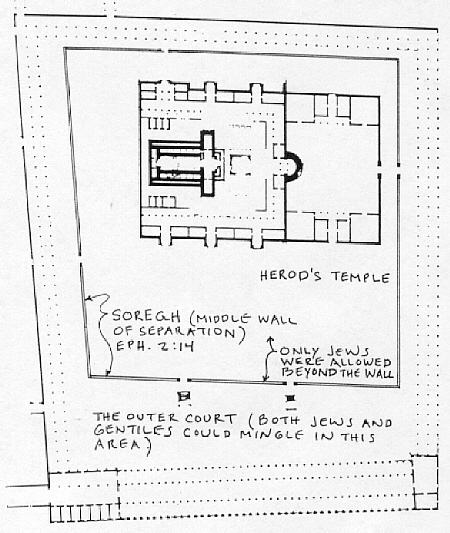 Let's notice verse 14 in the King James version: "For he is our peace, who hath made both one, and hath broken down the middle wall of partition between us;"
Let's focus on the phrase in this passage of scripture: "the middle wall of division between us".
What is this "middle wall of division"?
The "Zondervan Pictorial Encyclopedia of the Bible, Article: Temple, Jerusalem" says: "The Soregh: Below the Chel, beyond the steps down from it, was an area bounded by a low wall called the Soregh (Middoth II, 3), three handbreadths high (c. thirty inches high), but three cubits high according to Josephus (Jos. War V. v. 2) and a finely wrought trellis work with ornamental columns on top. Middoth probably described the wall in its earlier form, whereas Josephus described it at a time after it had been embellished. On this wall on the outward side were placed warnings to Gentiles not to go beyond the wall, reading, No Gentile may enter within the railing around the sanctuary and within the enclosure. Whosoever should be caught will render himself liable to the death penalty which will inevitably follow. This probably was located north of the stairs up from the Huldah gate."

The following is a quote from: "The Daily Study Bible Series, the Letters to the Ephesians" by: William Barclay, page 111, Ephesians 2:14.
"Paul uses an even more vivid picture. He says that the middle wall of the barrier between has been torn down.
This is a picture from the Temple. The Temple consisted of a series of courts, each one a little higher than the one that went before, with the Temple itself in the inmost of the courts. First there was the Court of the Gentiles; then the Court of the Women; then the Court of the Israelites; then the Court of the Priests; and finally the Holy Place itself.
Only into the first of them could a Gentile come. Between it and the Court of the Women there was a wall, or rather a kind of screen of marble, beautifully wrought, and let into it at intervals were tablets which announced that if a Gentile proceeded any farther he was liable to instant death. Josephus, in his description of the Temple, says: "When you went through these first cloisters unto the second court of the Temple, there was a partition made of stone all round, whose height was three cubits. Its construction was very elegant; upon it stood pillars at equal distances from one another, declaring the law of purity, some in Greek and some in Roman letters that no foreigner should go within the sanctuary" (The Wars of the Jews, 5, 5, 2). In another description he says of the second court of the Temple: "This was encompassed by a stone wall for a partition, with an inscription which forbade any foreigner to go in under pain of death" (The Antiquities of the Jews, 15, 11, 5). In 1871 one of these prohibiting tablets was actually discovered, and the inscription on it reads: "Let no one of any other nation come within the fence and barrier around the Holy Place. Whosoever will be taken doing so will himself be responsible for the fact that his death will ensue."
Paul well knew that barrier, for his arrest at Jerusalem, which led to his final imprisonment and death, was due to the fact that he had been wrongly accused of bringing Trophimus, an Ephesian Gentile, into the Temple beyond the barrier (Acts 21: 28, 29). So then the intervening wall with its barrier shut the Gentile out from the presence of God."

The following is a quote from: "The Wycliffe Bible Dictionary" - Article: "MIDDLE WALL OF PARTITION".
"A Pauline figure of speech to signify the removal of enmity between the Jew and the Gentile, bringing about the unity of the Body of Christ, the Church (Eph 2:14). Literally, it refers to an actual wall in the temple of Jerusalem beyond which no Gentile might safely pass (see Josephus Ant. xv.11.5; Wars v.5.2). That such an allusion should have occurred to Paul appears natural, if we remember that he was falsely accused of bringing in Trophimus, the Ephesian, past the barrier, and thus polluting the sacred precincts of the temple proper (Acts 21:29;24:6). This misunderstanding almost cost the apostle his life."
Acts 21:29 (KJV) says: "(For they had seen before with him in the city Trophimus an Ephesian, whom they supposed that Paul had brought into the temple.)"
Acts 24:6 (KJV) "Who also hath gone about to profane the temple: whom we took, and would have judged according to our law."
"The middle wall of partition was constructed of marble, highly decorated. In 1871, as a result of Clermont-Ganneau's excavations, one of the limestone blocks of this wall was unearthed, bearing the following Greek inscription: "No one of another nation is to enter within the fence and enclosure around the temple, and whoever is caught will have himself to blame that his death ensues" (cf. Deiss LAE, pp. 79ff.). The wall was thus the separating barrier between national Jews and (mere) pious Gentiles."

This "middle wall of division" was a physical wall that the Jews had erected. The Jews erected this wall to separate the Gentiles from God. The Jews were exclusionists and wanted God to be only their God. God had a different idea, He wanted to be the God of all mankind.
Notice verse 14 again: "For He Himself is our peace, who has made both one, and has broken down the middle wall of division between us".
Notice that the middle wall was to be broken down! The Jews and Gentiles are to be "made both one" in unity.